Jannine talks about the (relatively) recent discovery of a new void in the Great Pyramid at Giza. 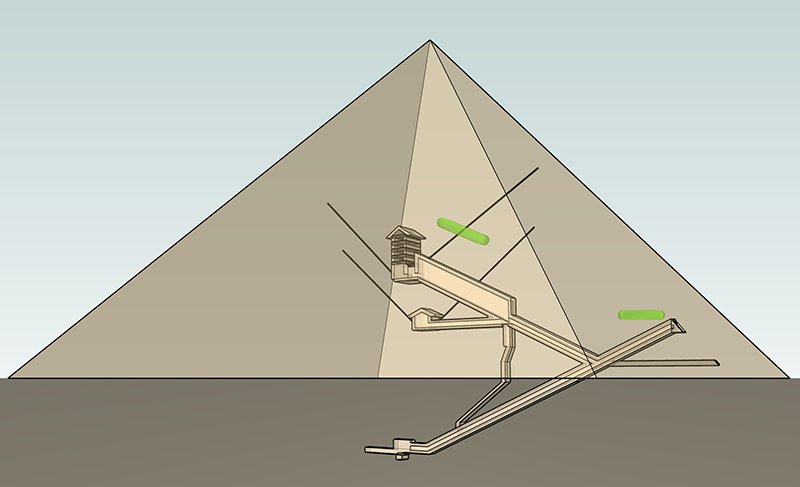 The Great Pyramid at Giza is the oldest of the 7 Wonders of the Ancient World, and the only one left largely intact. Designed by Hemiunu for the Pharaoh Khufu and located outside Cairo on the Giza plateau, it was completed sometime around 2560 B.C.E. Khufu's Pyramid remains the world’s tallest.

Recently a team of scientists and researchers have announced a new discovery about the Great Pyramid of Giza: a previously hidden void that was detected using muon tomography. This is part of a larger effort called the Scan Pyramids Project, which you should absolutely check out here. “Tomography” describes a technique for displaying a representation of a cross section through a solid object using X-rays, ultrasound, or subatomic particles. In this case it’s muons.

Muons are subatomic particles that are produced when cosmic rays collide with earth’s atmosphere. They shower the earth at all times and are able to travel through solids as well as empty space, though much more slowly. Knowing this, scientists are able to “scan” structures by recording the accumulation of muons passing through them on special films, similar in concept to photography. Areas of higher concentration on the film mean that more muons were able to pass through that space in the same amount of time, indicating a void in the stone.

For a structure as large as a pyramid, many plates were positioned all throughout the monument and were left in place for months to collect data. At first scientists were puzzled by their results, but a second experiment confirmed what they suspected: a large void near the center of the pyramid, directly above the Grand Gallery and measuring more than 30 meters long. Also found was another, smaller void located just behind the originally hidden main entrance.

The new discovery is marked by debate, as Egyptologists claim that the void is nothing more than a channel meant to relieve stress and redirect forces around the grand gallery below. Those on the Nagoya University team that made the discovery, however, argue that the void does not fit the characteristics of any of the other stress-relieving chambers. They believe that there could be more significance to its presence. Perhaps further research will tell, though scientists plan on sticking with non-invasive investigation to preserve the structure. Perhaps we’ll never find out?

Besides being totally obsessed with ancient Egypt since childhood, a great reason for building this model was to play around with the new section tools included in SketchUp 2018. I was able to place multiple active section planes in my model and engage the "section fill" tool so that I had a nice cutaway view of the internal chambers versus the surrounding stone. Neat!

Originally ~480.6’ tall, Khufu's Pyramid shrunk in height by about 25 feet due to loss over the ages of the polished white limestone that once encased the pyramid and allowed it to be seen for miles around.

The Pyramid is almost a perfect square, and each of its sides faces a cardinal direction. When reconstructing the pyramid in SketchUp from reported dimensions I found only an 8” discrepancy between the north and south sides.

This is the only pyramid known to have “air shafts” leading from the King’s and Queen’s chambers. Only about 7” x 5” wide and considered one of the trickier construction details in the structure, their purpose remains unknown, though we know they're not actually for ventilation.

There are many conflicting theories as to how the great pyramid was constructed. Estimates range from 6,500 to 40,000 workers, and hypothetical construction methods include ramps, scaffolds, rope and pulley systems, and aliens. The current prevailing theory is that it was built from the inside-out using an internal ramp, posited by architect Jean-Pierre Houdin.

The ancient Greeks were the ones to start the rumor that slave labor was used to build the pyramids. After centuries of excavation of surrounding structures and work sites it is now generally accepted that the force was comprised of skilled workers that were paid for their labor.