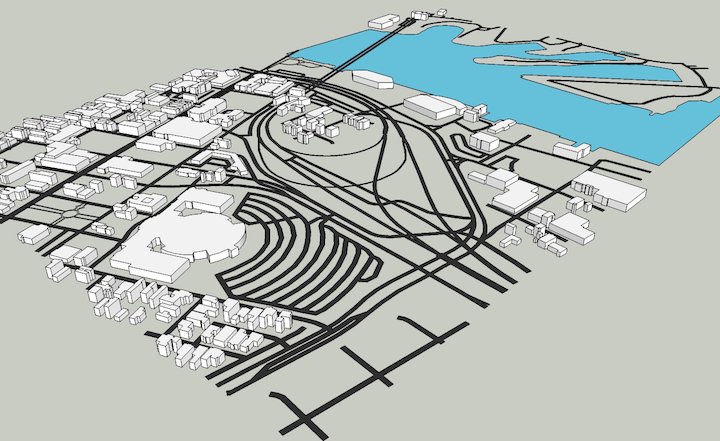 Last month I had the honor of beta-testing Placemaker, a smart plugin that automatically integrates infrastructure data into 3D using the SketchUp geo-location feature. The full version has just been released (congratulations to mind.sight.studios!), and we are excited to continue integrating it into our workflow. Here's a rough idea of how Placemaker works: the general massing of roads, buildings, water bodies, and certain recreational paths appear as layered objects—a phenomenal time saver for getting started with the basics of location modeling.

Bridging OpenStreetMap and SketchUp is very fruitful, yes! Its photomatch feature integrates Google streetview, giving a sense of the canopy, true building height (Placemaker's building heights are sometimes a little off from reality, as you can see below), and striping. Street view imagery can also be projected as building textures.

Placemaker is a game-changer in geo-specific modeling. Thanks to Dale Martens for choosing us to test drive!

Yelena Prusakova was an illustrator at Fat Pencil Studio from 2013-2017.