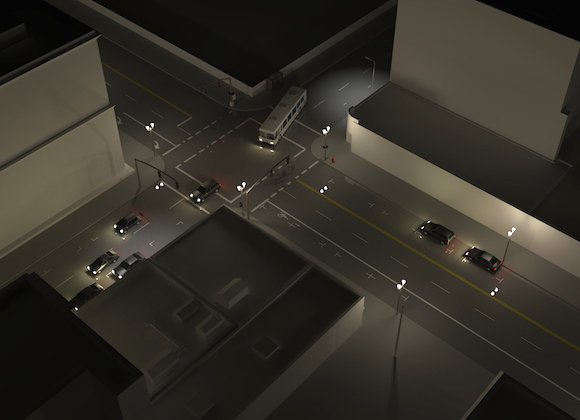 The work we do at Fat Pencil Studio doesn't generally call for photorealism. Clarity, precision and a certain aesthetic quality can be achieved without ray-tracing or advanced lighting effects, so until recently we haven't gone to the trouble of using computer rendering software to create more realistic shading in our 3d models.

Computer rendering is a very complex task since the computer has to figure out all the hard physics behind how light reacts to object surfaces under specific environmental conditions. But as computational power and software accessibility has increased significantly in recent years, we decided it was time to get our feet wet. I decided to experiment with a free SketchUp rendering plug-in called Kerkythea in order to simulate two specific conditions: a reflection in a mirror, and a night scene.

Mirror reflection: For this case I modeled two rear-view mirrors based on reference technical drawings. One of the mirrors is not flat, which of course affects its reflective properties. I set up these reflective materials and an ideal lighting studio scene in Kerkythea to see how the mirrors would behave. Although this is not a completely photorealistic outcome, it does show accurate mirror reflections.

Night scene: SketchUp does have some controls for daytime rendering, namely it can draw shadows based on location, date and time of day. However, at night there is no sun or shadows, so the model just looks dark. Using Kerkythea, I can assign lights to elements in the model such as street lamps, car lights, and some traffic lights. I had to be somewhat restrained with this since the render time increases considerably when you have more lights and materials (consider than in a real night environment there are lights from buildings, billboards, bikes, or even the moon).

I also had the chance to try out another 3d visualization software called Lumion. Compared with Kerkythea, Lumion's rendering engine is less accurate, but much faster. You can add and modify lighting conditions, landscape, and textures, as well as animate entourage such as people and vegetation, all in real time. To try it out, I worked with one of our transportation models. The model shows a new bike lane on a street in downtown Portland. I animated it with people, bikes and cars. Check it out!

Sebastian Marticorena was an illustrator at Fat Pencil Studio from 2014-2016.