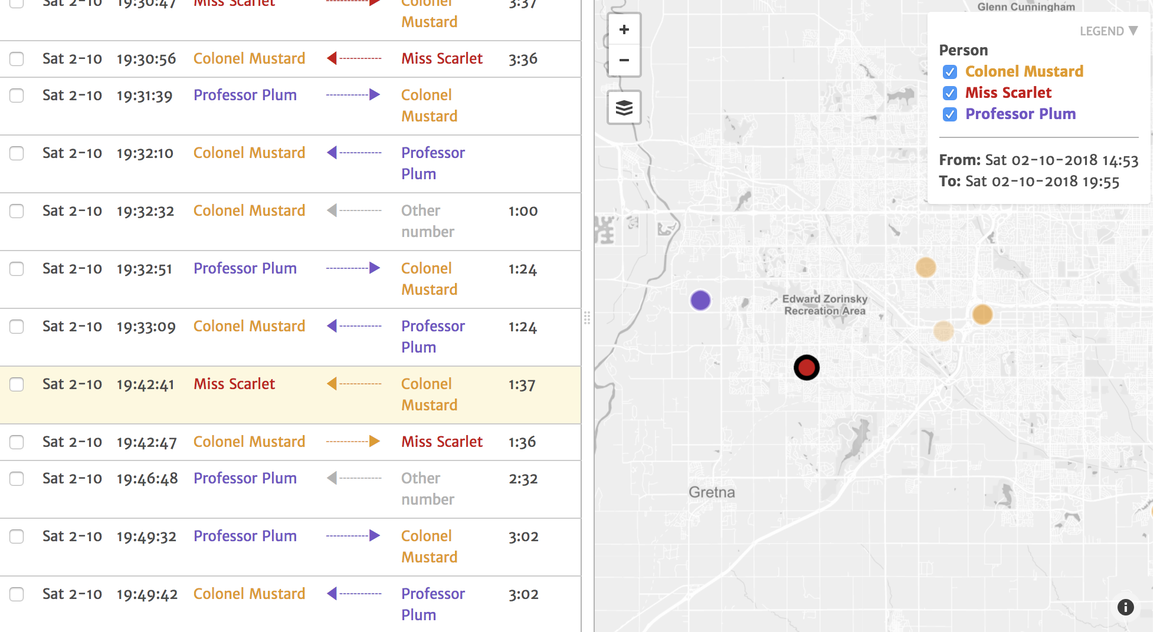 We recently had the opportunity to work with criminal defense counsel on a case with an interesting set of facts. It was known that three people traveled across state lines, and that illegal activities ensued. The precise nature of these activities, and the motivations of the people involved, however, were hotly disputed. The legal team had access to cellular tower location call records of the parties involved, and had a hunch that much could be learned from studying this data. But there were literally thousands of calls, and the phone companies provided records in a format that wasn’t exactly easy to work with (understatement alert). Our job was to create a way to visualize and interrogate this data so the attorneys could develop the story of their case.

Here's a sample of what the raw data looked like: 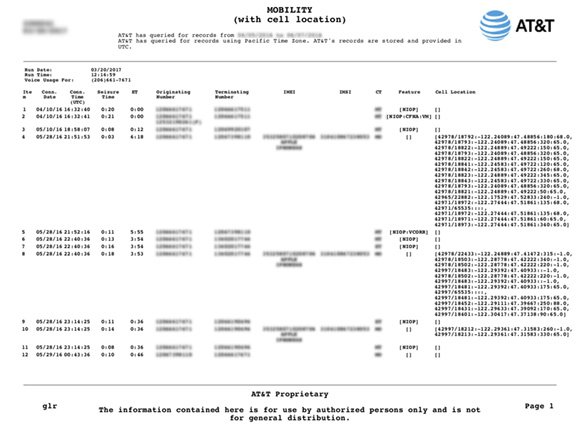 We’ve worked with some gnarly data sets in the past, but this particular challenge called for something a little outside of our usual bag of tricks. So we teamed up with ace developer Paul Souders of Scrubjay to design and produce a custom data interface that allowed the legal team to track the activities of the three people involved in time, geographic space, and in relation to each other. Paul did an amazing job of taming the raw data and coming up with effective solutions to achieve the functionality we were after.

To protect the identities of the people involved, we’ve created a demo version of the interface using just a few days of hypothetical data. Click on the image below to check it out (works best in Chrome).

Each call is listed in a table on the left showing the date, time and duration of the call along with the identity of the caller and recipient. You can check/un-check calls to show or hide them as desired. You can also limit the data set by selecting a time range in the timeline at the bottom. The locations of the pinged cell towers are plotted on the map at the right. The calls are color coded by who made them. Check boxes on the right allow you to filter the data by caller as well.

The interface proved highly useful in reconstructing events on key dates, and rebutting the prosecution’s characterizations of what happened. It was an excellent investigative tool for the legal team, but further work was needed to distill what they had learned into a coherent story for the jury. (Different audiences! Different graphic approaches! See: Many Audiences.) So we used the interface as a basis for annotated graphics that turned the data into an understandable sequence of events.

All in all, it was one of the most ambitious projects we’ve ever worked on. We were lucky to work with a legal team who had the vision and tenacity to pursue the story hidden within the data.

I just want to thank you again for the excellent service and results from your team in this case. It has, again, been very fulfilling to work with a group of highly responsive and creative professionals. We look forward to the next engagement.