3d scenes show the plausibility of an alternative scenario in a "high" stakes arrest case. 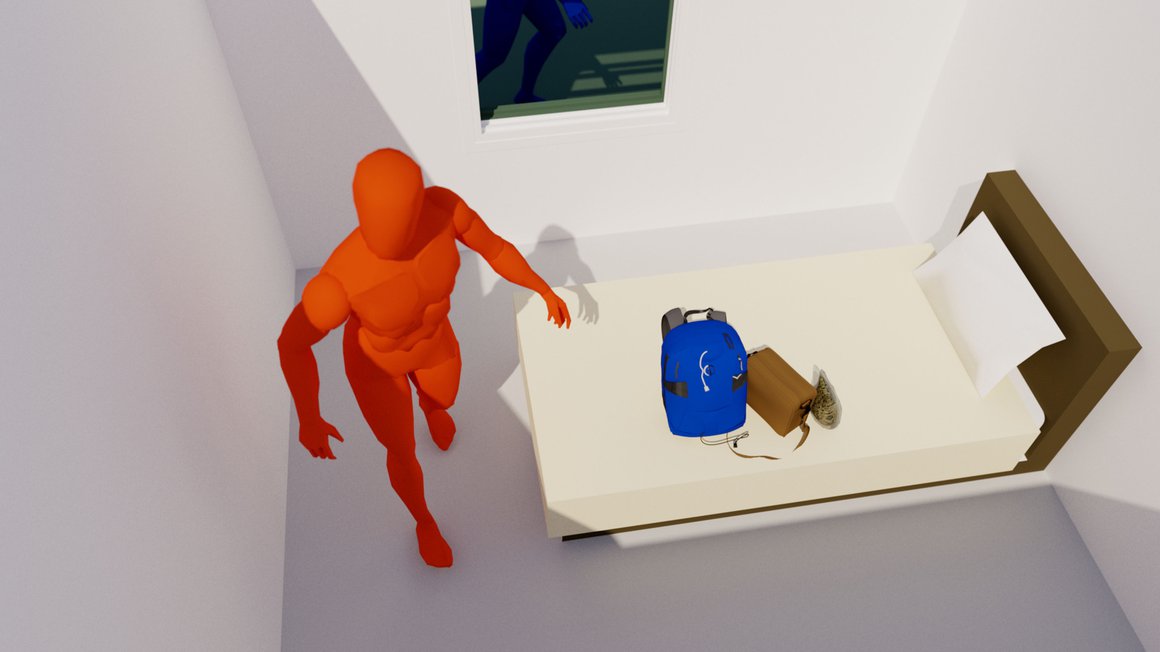 Quite often, the legal projects we are asked to work on become about discovering plausible alternative narratives. These are the important what-ifs that can impact the outcome of a case. The pot-backpack project (as we refer to it around the studio) is a prime example of our work illustrating and legitimizing such what-ifs. The theories of the Pot Backpack case presented by each side hinged 1) on the ownership of two bags containing drugs and a large quantity of weed and 2) on how the two bags and weed ended up where they did. The illustrations we contributed represented the narratives of both sides, the prosecution and defense.

Local law enforcement officials suspect drug-related activity is occurring at a home. Three officers arrive at the home – two knock at the front door, one (the blue figure) walks around to the back of the residence. In a back bedroom is a resident (orange), and standing outside the back window of the bedroom is another individual (yellow). Officer Blue sees persons Orange and Yellow and suspects a drug-related transaction is occurring. Officer Blue arrests Yellow. The backpack, small leather satchel, and baggy of weed are found under the bedroom’s side window, between the house and yard fence.

The prosecution’s interpretation of events was that Yellow was the owner of the bags and weed. As Officer Blue comes around to the back of the house, they hypothesize that Yellow stashed everything between the fence and the house. This sounds entirely plausible, right? This narrative places the responsibility on Yellow, who instead of just having bought a small amount of weed would have been in possession of A LOT of drugs. That difference in quantity possessed would have implied intent to distribute and had a dramatic impact on sentencing.

The defense posited that the backpack, satchel, and weed baggy were actually the property of Orange. They proposed that the bags had been inside the bedroom (possibly on the bed, as shown), and that when Officer Blue had apprehended Yellow, Orange had reacted by throwing everything out of the side window. The defense maintained that Orange had sufficient time between Officer Blue appearing and the other officers knocking on the bedroom door to toss the bags.

Using our scene model, the defense was able to show the judge and jury their what-if, and compare it to the prosecution's story. They were able to show what Orange’s choices and actions may have been inside the bedroom. Visually representing what may have happened both outside and inside the house provided a broader perspective on the situation and presented a plausible alternative.