The city and its landmarks as fashioned by developers and gamers both. 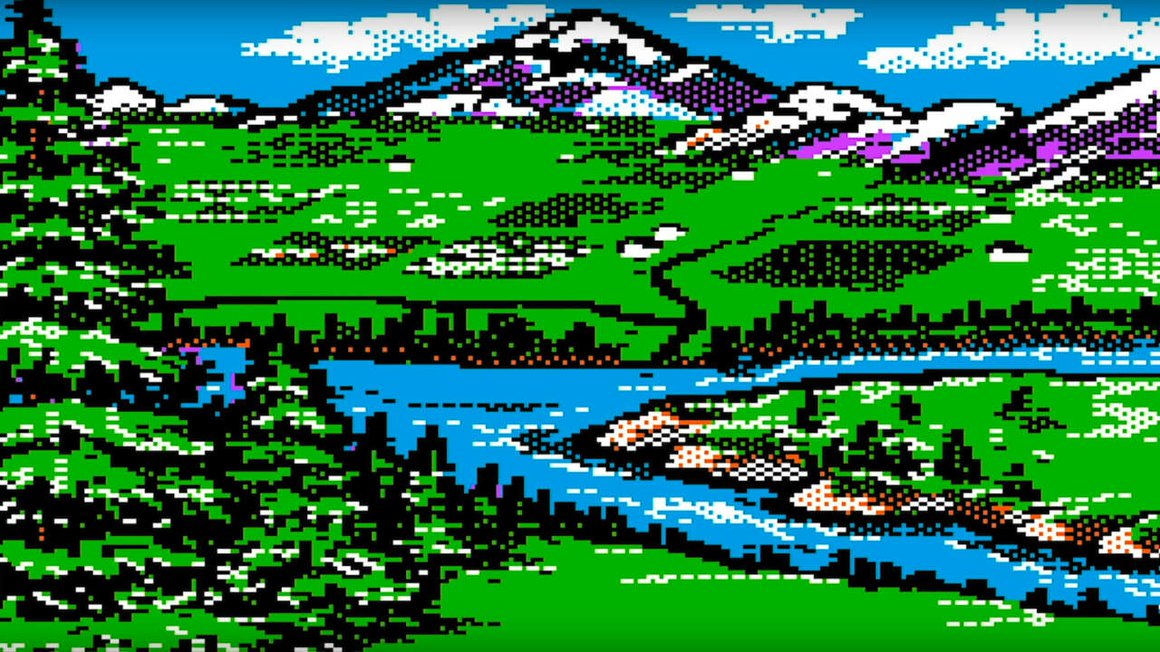 Portland has been an axis of artistic and social interpolation for decades, and recent advancements in digital tools and technology afford a greater scope of expression to visualize the development of the city– not only in its actual form but across various media.

In our work at Fat Pencil Studio, we are often tasked with recreating pieces of major Oregon cities through 3-D renders and graphic illustrations for use in legal mediation. But this process is not limited to investigative practices. Since 1971, with the release of the original Oregon Trail, video games of various genres have been featuring the Portland region. Sometimes it's part of an original published work, but often by virtue of the innate game mechanics, players are able to construct their own versions with which they and others can directly interact.

Sandbox and simulative games like Minecraft, SimCity, and Cities Skylines are especially ripe for crafting personal iterations of the metropolis, each providing diegetic tools and prefabricated objects of varying complexity and capabilities with which you can take on the role of sole architect in carving out a specific landscape and manifesting whatever urban or provincial designs you desire.

Reddit user DrunkTankCommander meticulously used images from Google Earth to tackle the construction of Portland proper in Colossal Order’s 2015 game, Cities Skylines.  The conceit of the title was to marry purely creative exploit with civil logistics, whereby you can edit your model according to in-game simulated traffic flow of almost a million unique citizens.  While Portland boasts closer to 3.2 million inhabitants, this technique can be employed in approximating more efficacious community planning—at least virtually. DrunkTankCommander managed a readily recognizable interpretation without having ever visited the city in person. 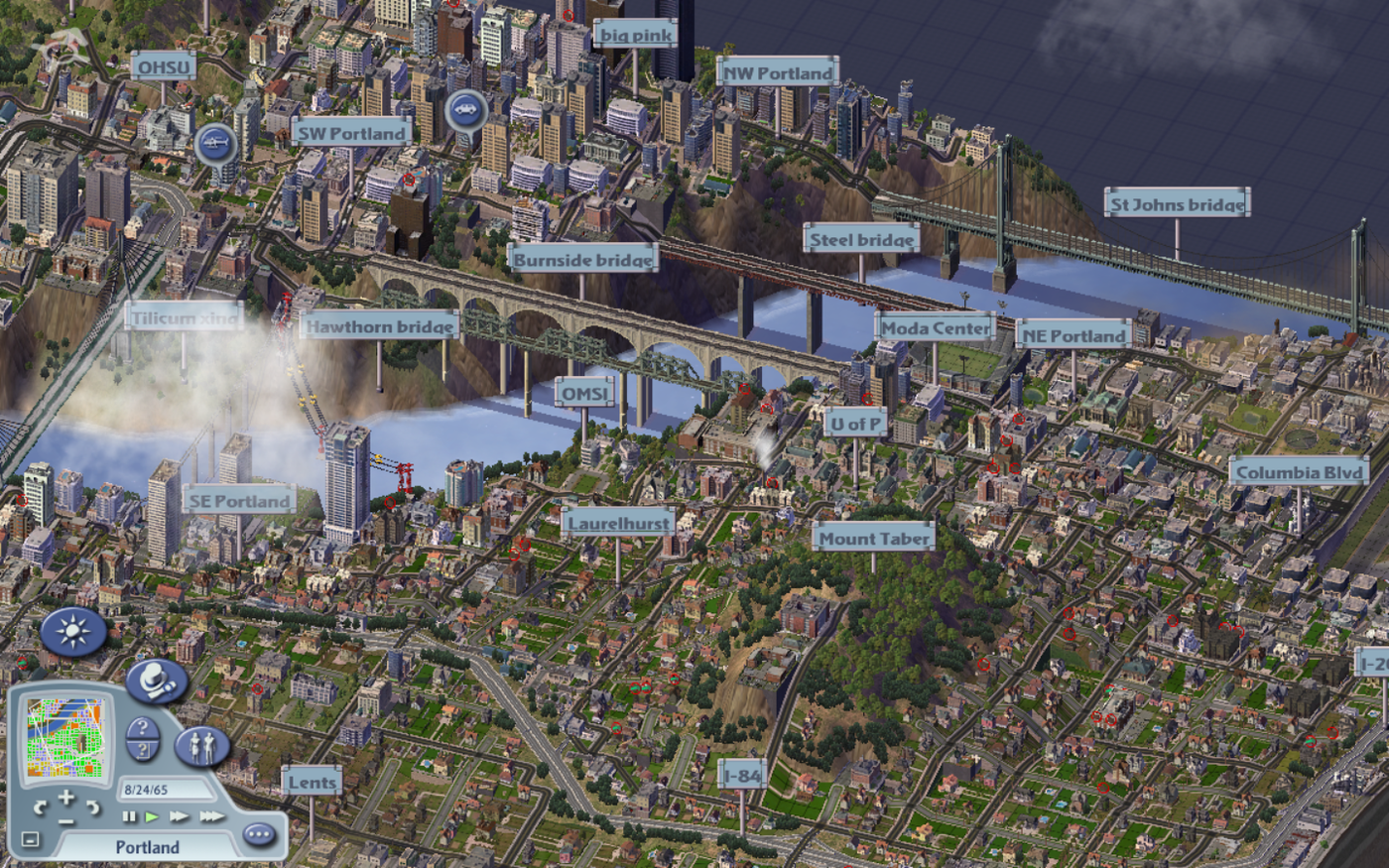 Reddit user MannyDantyla assembled an isometric simulacrum of the heart of Portland using limited assets in SimCity, marking significant bridges, buildings, and boroughs.  A special mission in SimCity 2000 involved the unexpected eruption of a volcano in downtown Portland, whereby your aim is to successfully douse the fires, clean the debris, and rebuild the city to a specified level within a given time frame.

portlandexpos04, a user on Simtropolis, an open forum dedicated to city-building games comprising discussion, images, asset exchange, and news, modeled downtown Portland in SimCity—containing even in relatively low-resolution accurate variation in design of the bridges spanning the Willamette—and wrote extensively about their home, including methods of travel, notable buildings and their histories, major neighborhoods, and local businesses.  They even cover a personal interview with Neil Fairbanks, founder of Rush Hour Brewing Company.

Planet Minecraft user Maxxeine manufactured their own remarkably detailed version of Oregon’s largest urban center in Minecraft, delineating details such as differentiations in brick patterns of particular building façades and light fixtures dotting the interiors of others.  Just don’t get caught by any Creepers trying to cross the street at Yamhill and 3rd on your way to Guardian Games.

In Microsoft Flight Simulator 2020, available on Xbox and Steam, you can travel by small plane over a high-detail rendering of downtown Portland, skirting the banks of the Willamette and nearly kissing top-level offices with the tips of your wings as you never would be able to in life, complete with real-time, dynamic weather effects.

If you're wondering how in the world did they build the whole world, check out this feature of how the simulation was made. The team at Asobo Studio used satellite imagery of Bing Maps, photogrammetry, Open Street Maps, generated buildings, hand-designed buildings, machine learning and cloud computing.

SCS Software’s 2016 game, American Truck Simulator, released a map expansion DLC that contains Portland—well aware of its “Bridge Town” epithet, the developer ensured the addition of many of those that divide the city, including the Fremont, Burnside, and Hawthorne bridges, so well as Tilikum Crossing.

Providence Park in Goose Hollow, where the Timbers and Thorns call home, is featured as a playable stadium in EA's FIFA 2022.

The gaming community is an expansive and expressive one, and it is only escalating exponentially in scale and scope as we move in to the future of digital media—one day, we may be able to saunter our way along Sandy or Burnside inside of such a precise VR environment that we can’t distinguish it from reality.  The extent to which we’ll be able to fabricate entirely new worlds is already nearing endless, and the possibilities for real-world application, even in our own work, are nascent but already burgeoning and inspiring.