Tips for creating terrain models in SketchUp that work with Vissim traffic simulations. 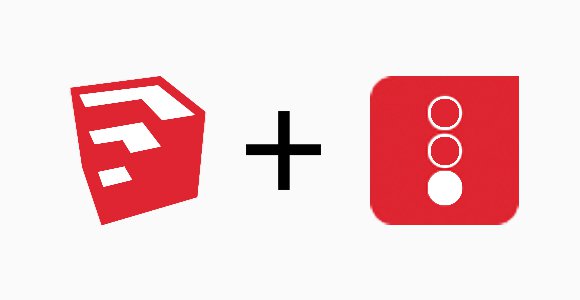 As you can read about in our on-going series of posts on the subject, we've been working on developing an efficient workflow for integrating SketchUp models into Vissim traffic simulations. While it is relatively straightforward to import 3d context into a traffic simulation that assumes a flat ground plane, our latest efforts have been focused on what is required to create a simulation with traffic that tracks 3d terrain. We presented the following technique along with engineers from Kittelson Associates at the North America PTV Vision Traffic User Group Meeting last month.

The path of a traffic object (e.g., cars, buses, pedestrians, etc.) in Vissim is called a "link." When a link is flat, it's not a big deal, but when terrain is involved, positioning links that trace the shape of the model is very tedious. So we came up with a system in which we could generate coordinates from our SketchUp models in order to import them to Vissim as link definitions. For this experiment, we created a simplified urban terrain that represents streets along blocks as simple slopes arriving at flat intersections. In such terrain, each lane of traffic can be described by two x,y,z coordinates per block. In order to generate and export these coordinates, we used a plug-in called Point Gadget. In order to use Point Gadget, we had to find the geometric center of the model and locate it at the default axes origin (0,0,0). This required yet another plug-in called CLF Center on Origin.

After we generated and labeled our points, we exported them as an .xml file, and formatted the data to match the text pattern of a Vissim .inpx file. Then it was a simple matter of copy and paste to replace the existing coordinates for the links within the .inpx file. Once we imported our 3d model to Vissim (centered at the same point of origin), the Vissim links matched exactly with the model, allowing the simulation to run perfectly.

Sebastian Marticorena was an illustrator at Fat Pencil Studio from 2014-2016.