The future of the Burnside Bridge is being written today as part of a long range planning project to retrofit or replace the historic span in order to have a river crossing in downtown Portland capable of withstanding a major earthquake.

Multnomah County has convened a large group of stakeholders to weigh in on this important multi-year project. A feasibility study was completed last year. Fat Pencil Studio is part of the project team working to create a draft Environmental Impact Statement (EIS). We developed a 3d model to help visualize the existing bridge and surrounding context, as well as preview the various replacement options being considered. You can learn more and send comments at the Earthquake Ready Burnside Bridge web site.

Part of what makes this project complex is how tightly knit into the city the existing bridge is: On the west side, the bridge approach rises from the historic Old Town neighborhood and crosses over a Max line, Naito Parkway, Saturday market and Tom McCall waterfront park. On the east, the bridge crosses the floating portion of the Esplanade multi-use path, then Interstate 5 and the Union Pacific railroad, before landing at MLK boulevard. We put many of these details into our model, including the Japanese American Historical Plaza, and the Burnside Skate Park. 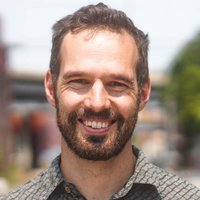 Joel Newman is a Senior Designer at Fat Pencil Studio