Low detail mannequins are great for quick studies, but additional realism is sometimes needed to tell a story. Here we explore the process of bringing more humanlike figures into SketchUp. 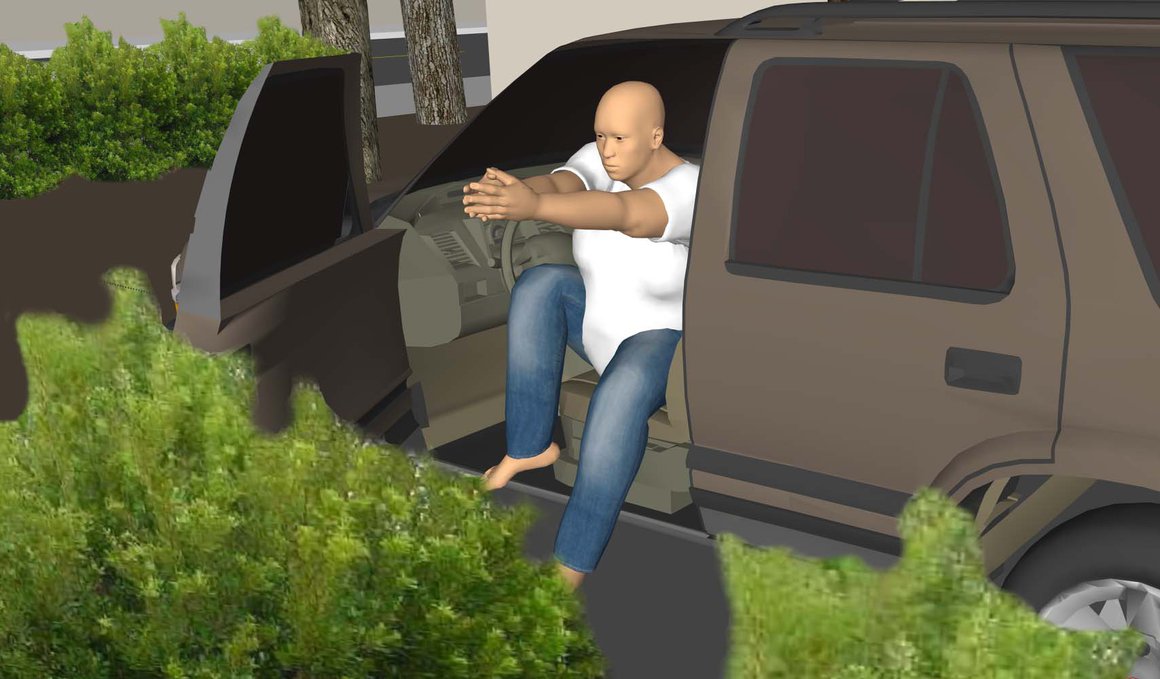 Generally when we have a need for human figures in our models we use generic figures. They are faceless and have a rather lean body composition. These figures are grouped into limbs, with joints where you would expect them to be. This makes it easy to adjust the pose, though the results are not as realistic as using a 3d model with internal rigging. 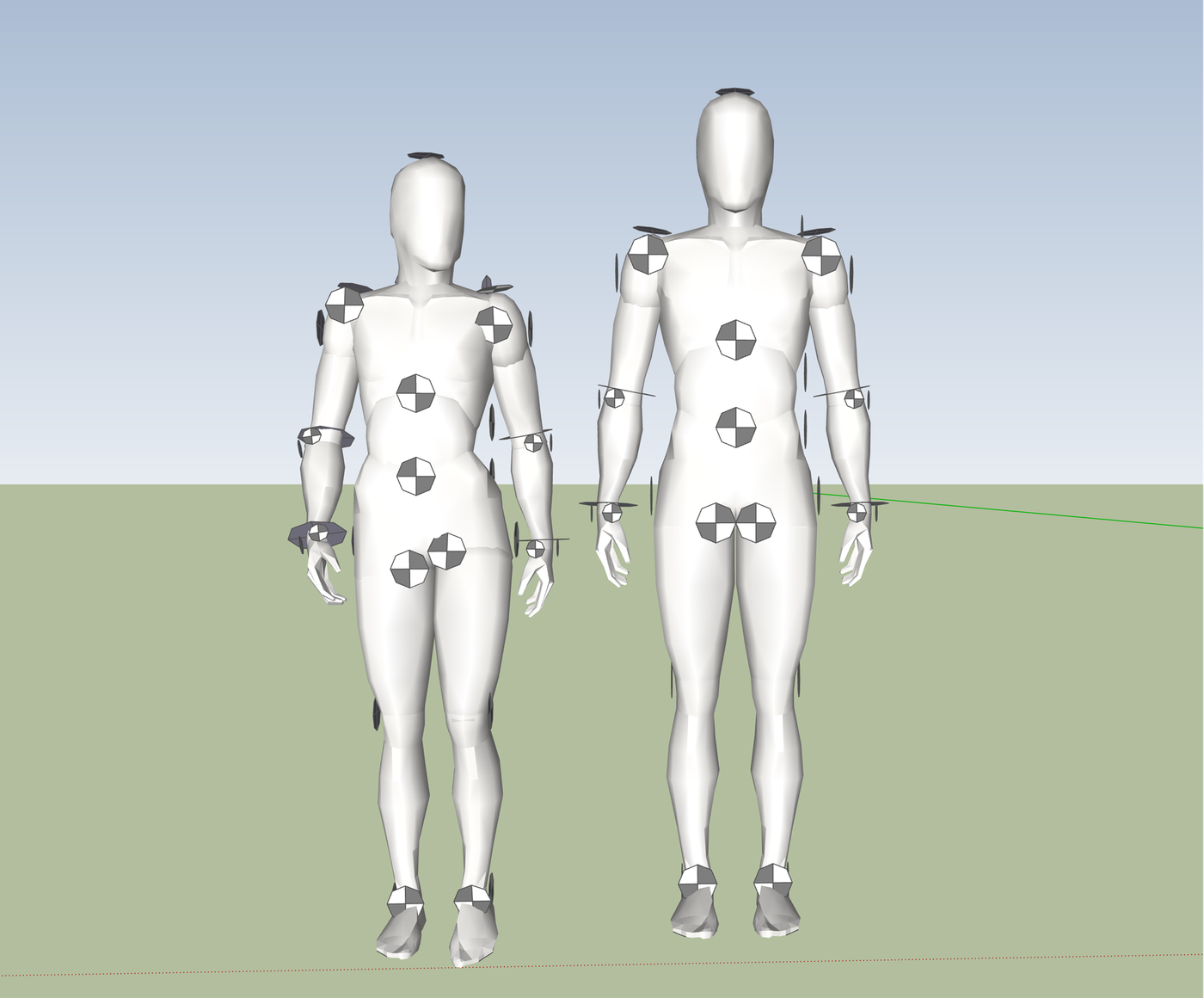 We like these generic human figures because they are easy to adjust in real time when working in SketchUp, while ignoring facial expressions, hair, clothing, and other issues that could easily distract an audience. However, there are occasions where realistic human features, such as a specific race, age, or body composition are critical to a story. It is not a trivial task to pose and import these realistic figures into SketchUp. Here is our current process:

Our first hurdle was figuring out a way to get a reliable reference for body composition if given some known information (height/weight). To generate this reference we use the Body Visualizer tool, created by a research group at the Max Planck Institute for Intelligent Systems. This web site offers sliders to set known measurements and predict others to generate a body composition model. You can orbit around the generated figure and change the color, but the the ability to export the 3d figure is not currently available.

Even though the results are not exportable, they create a great reference for recreating the figure. We can then take that reference and use MakeHuman to turn it into exportable geometry.

MakeHuman is free software that lets you create human 3d figures and customize many different features. There are flexible sliders for dialing in body size, race, age, and gender. MakeHuman has a large list of configurable options, some that we have not found a need for yet. But it's remarkable the level of detail that can be achieved with such an easy interface.

This age slider is particularly of interest to us because our standard SketchUp mannequins cannot be scaled to properly represent the proportions and composition of children and babies.

MakeHuman even has a small clothing library to clothe your figure. And most relevant to our next step is the option to add bones, aka rigging, that can be used to pose the human figure in Blender.

After the figure it configured to the desired result. It's then exported out to Blender for posing and scaling.

NOTE: There is a set of plugins needed for both MakeHuman and Blender for the two programs to play nicely together. Both of the plugins and documentation can be found here.

Blender is free open-source software for creating 3d objects. It's more complicated to learn and use than SketchUp (our standard 3d software) However, once imported into Blender, we can manipulate a 3d human figure using its internal bones. We also imported a portion of the final scene from our SketchUp model to provide spatial reference when posing the human figure. This helps us keep proportions and positions accurate. 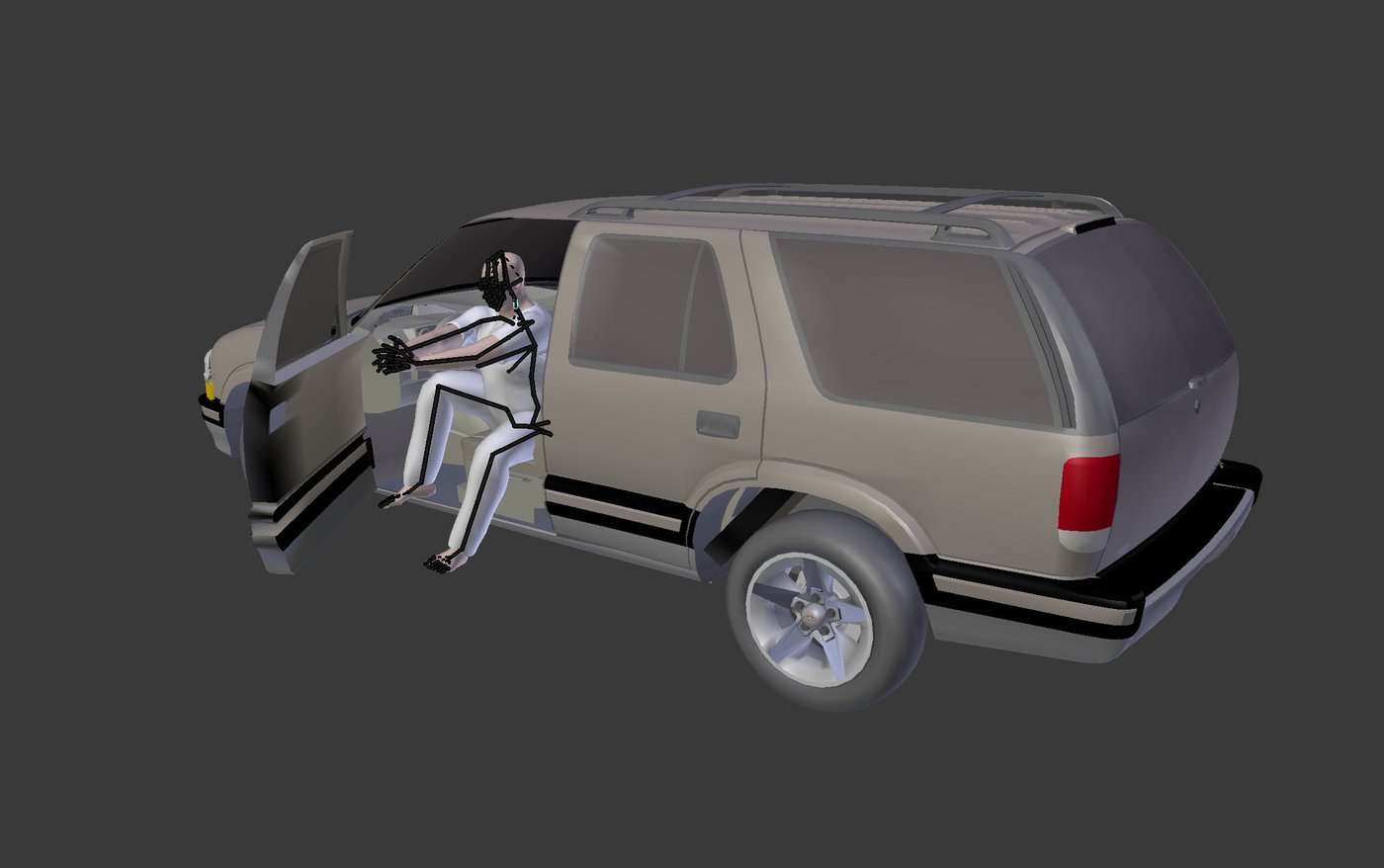 car from initial scene as reference

After the figures have been posed, the Blender scene needs to be exported (an .obj file works best) and then finally it can be imported into Sketchup (import .obj to Sketchup with Skimp) where colors and textures can be dialed in.

This method for creating human figures will prove valuable in situations where we need a little more detail to tell the intended story. Some might ask, "Why not just do all the 3d modeling in Blender, and skip SketchUp altogether?" It's possible we may get there in the future for certain projects. But there's a benefit to having all staff fluent with a single 3d program, and for now SketchUp provides the best all-around combination of flexibility and simplicity to meet our 3d needs.

Jazzy Winston was a Visual Designer at Fat Pencil Studio from 2019-2021.